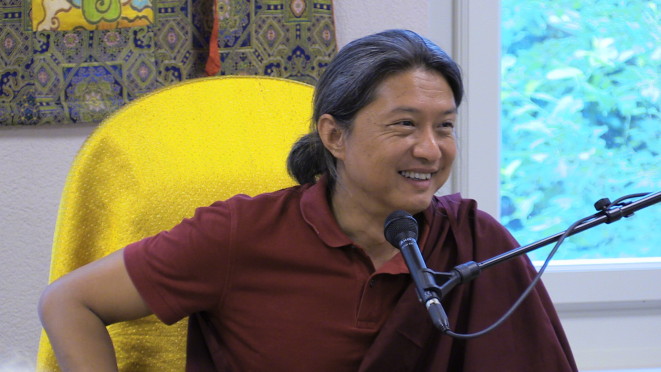 This second week of retreat brings two initiations, bestowed first by Dungsey Lhuntrul Dechen Gyurmey Rinpoche and then by Dungsey Gyetrul Jigme Rinpoche. And we, the students, spend time thinking about the future of our international center.

Two Major Initiations
It is not possible to describe in words, that would be worthy, the second week of our retreat. The program gives only a small sense of the immensity of our experience. Lhuntrul Rinpoche gives us first an initiation of Guru Rinpoche followed by teachings, and, during the second part of the week, it is Gyetrul Jigme Rinpoche who gives us instruction on Taksham Yeshe Tsogyal, followed by an initiation of her and her mandala … Needless to say the week passes at the speed of light, full of intense brightness, and the blessing of the wonderful good news that Lhuntrul Rinpoche must leave earlier than anticipated for Nepal, as his third child was about to be born. Some days later, we discover that it is a boy, and that his arrival is particularly blessed. Indeed, his name, “Dechen Jangchub Dorje” was chosen by H.E. Tertön Namkha Drimed Rabjam Rinpoche several months ago, as he knew before anyone else that it was a “great” birth. We learn the news with a special joy mingled with emotion and we open a congratulatory book in which each records his or her welcome message. We also send a gift, a gold pendant hanging from its chain, representing a beautiful silhouette of a horse in motion. What better choice could there be for a great heir of the Gesar of Ling line? 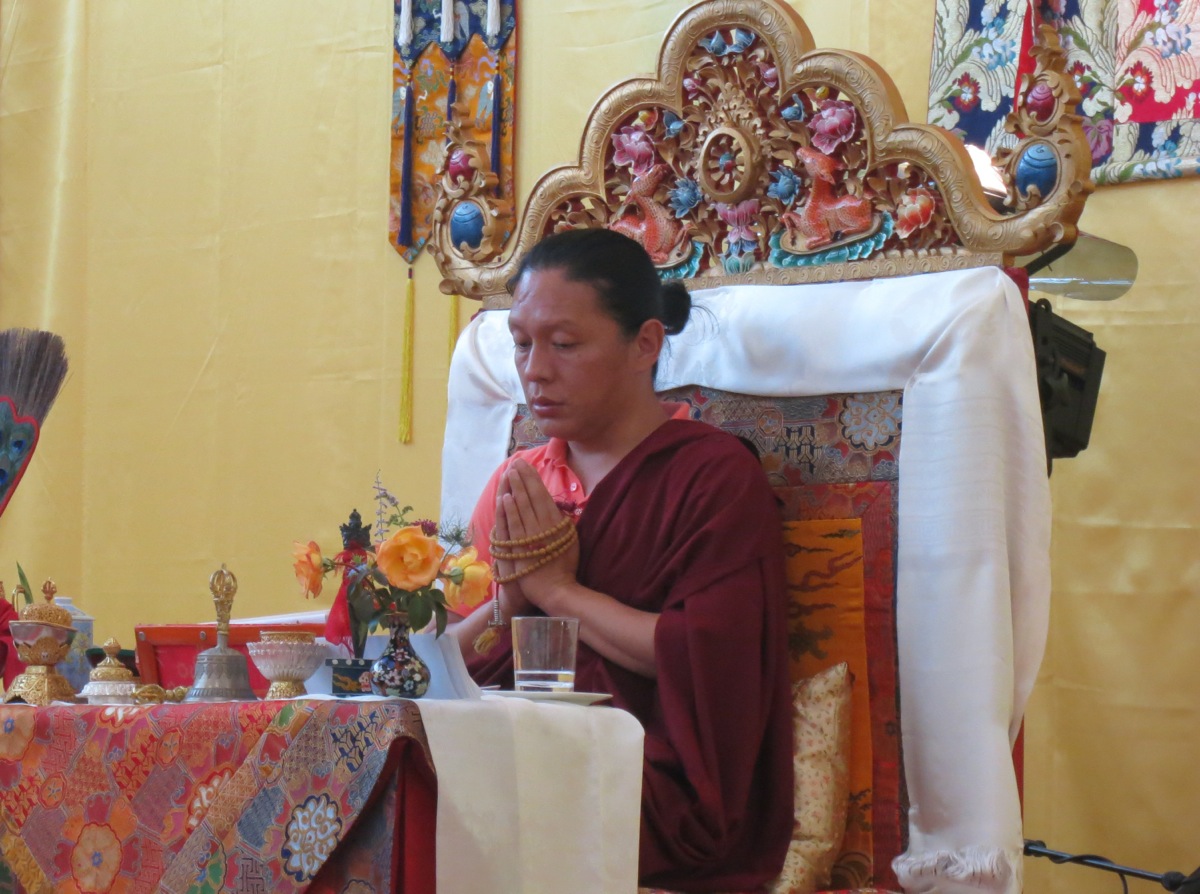 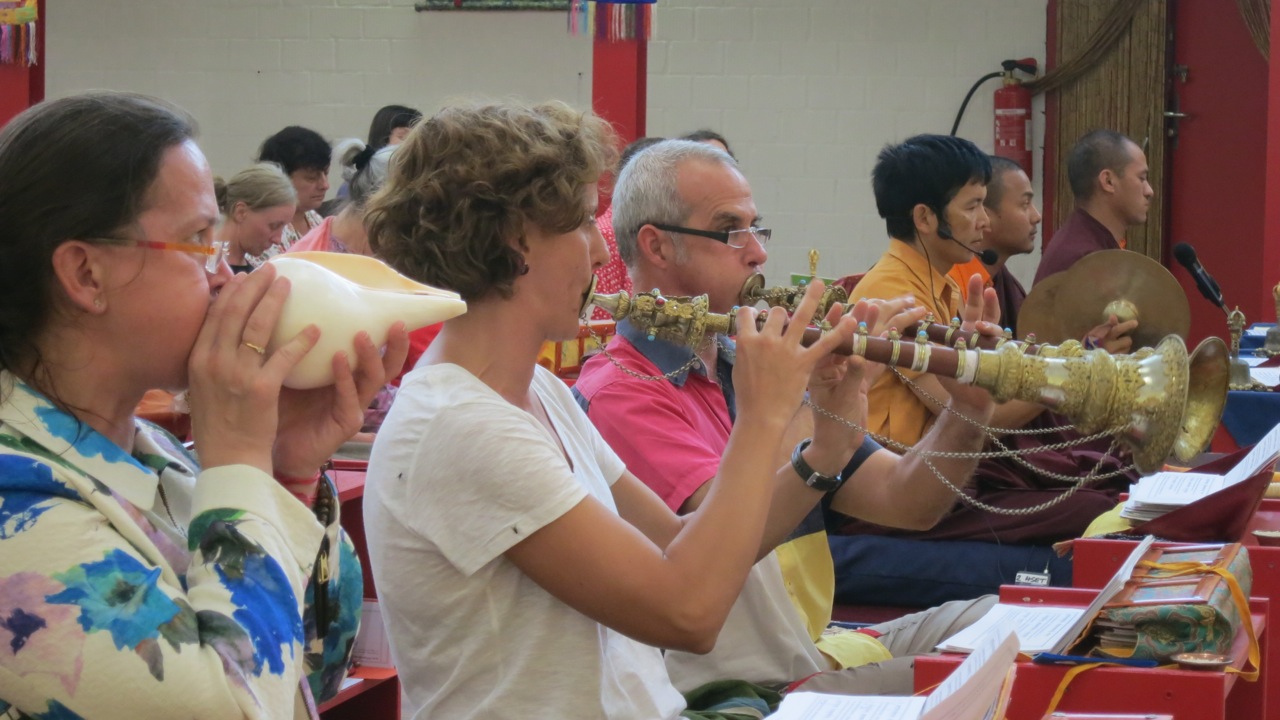 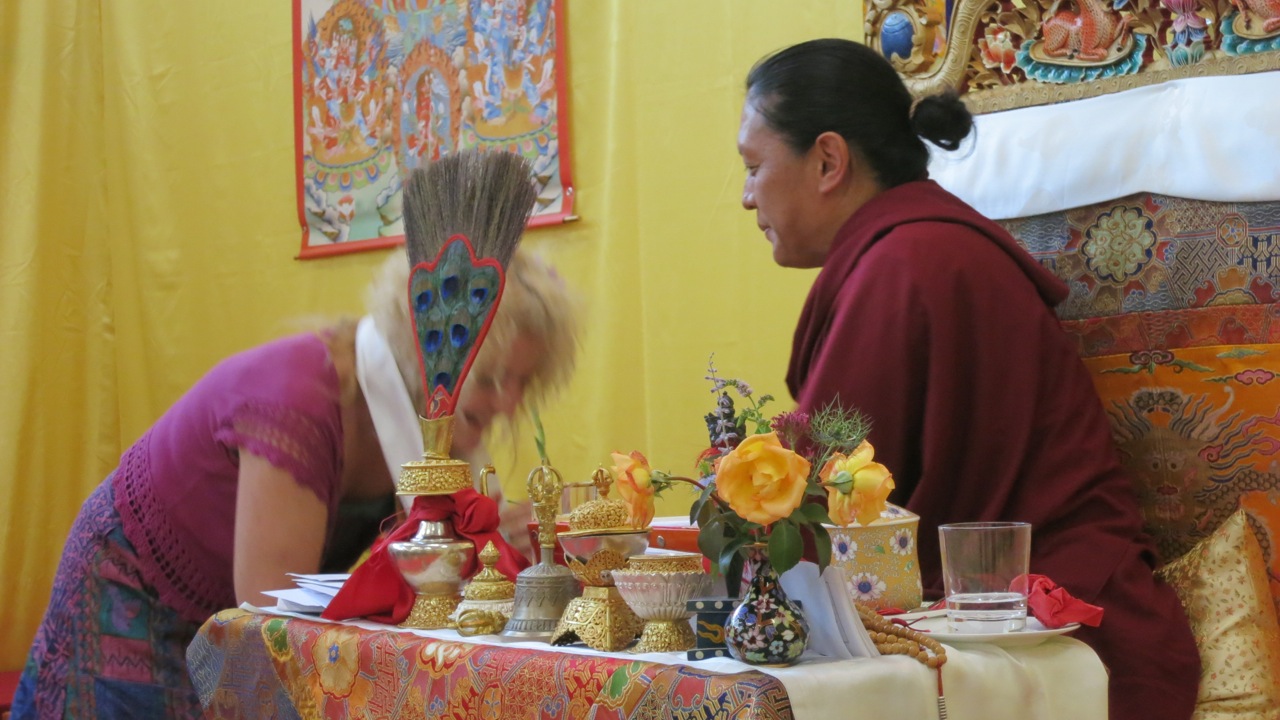 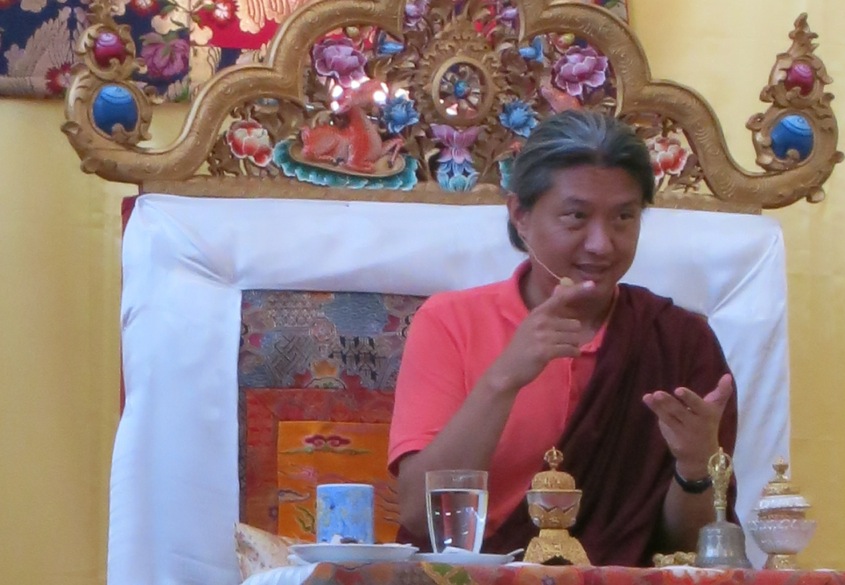 Lhuntrul Rinpoche… the ritual music group reunites monks and western students… Lama Tenzin is appreciated by all for his teaching abilities … And finally the incredible Gyetrul Jigme Rinpoche, as touching as ever, and even more impressive than before.

‘Summit’ Meeting
Involving all the students in the life of our center, through their suggestions, the exchange of ideas, and reflections on new projects … all with the perspective of developing a healthy financial state – these were the objectives of this ‘summit’ meeting, in which almost all the retreat participants were present. Other students came particularly just for the occasion. Well prepared, well organized and well presented, the meeting was notable for its breakout meetings in small groups, which worked on specific and concrete issues. What identity do we want to give our RIPA sangha? How might we revitalize all of our various regional associations that might have become a little bit less active? What rules should be established for the benefit of those who might wish to spend some time with us as residents at the center? Which future program activities should we keep? … The financial health of our center being also at the heart of our thinking, concrete and solid ideas were made on possible sources of funding and income generation. If you were not present, yet also wish to participate, by putting your skills at the service of the RIPA lineage, or if you wish to share your ideas, please contact riccom@ripa-international.com 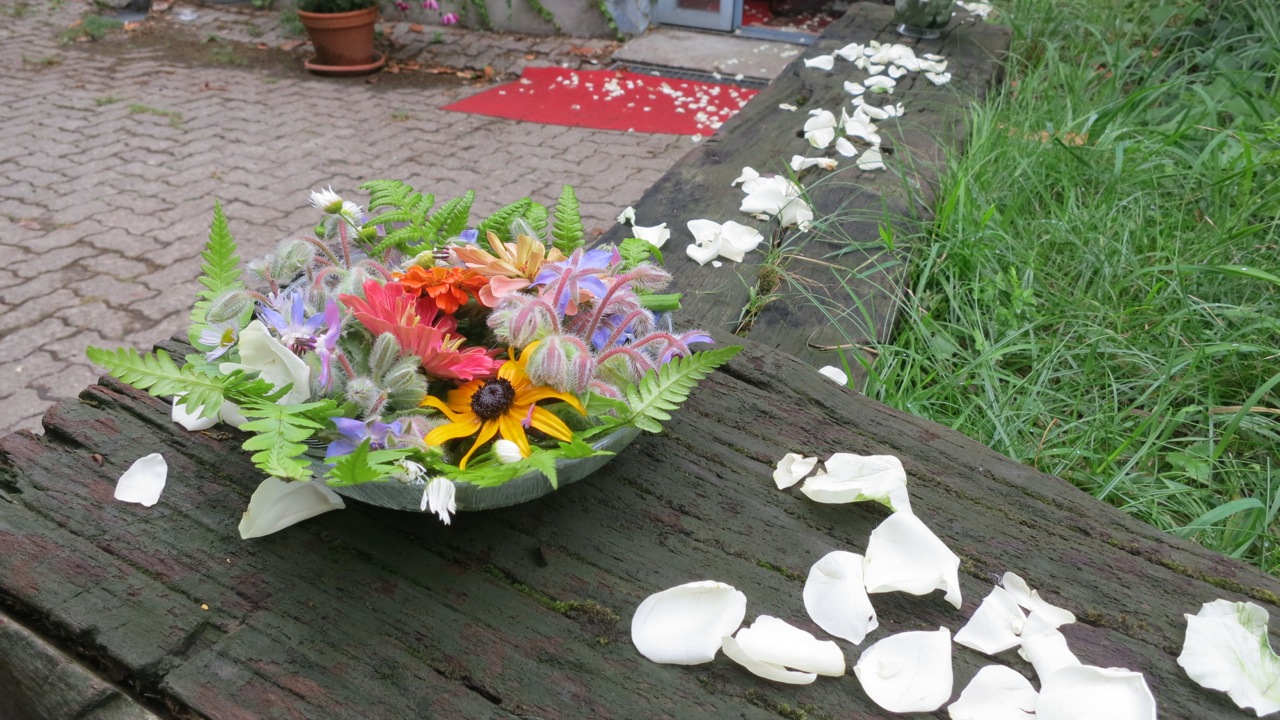 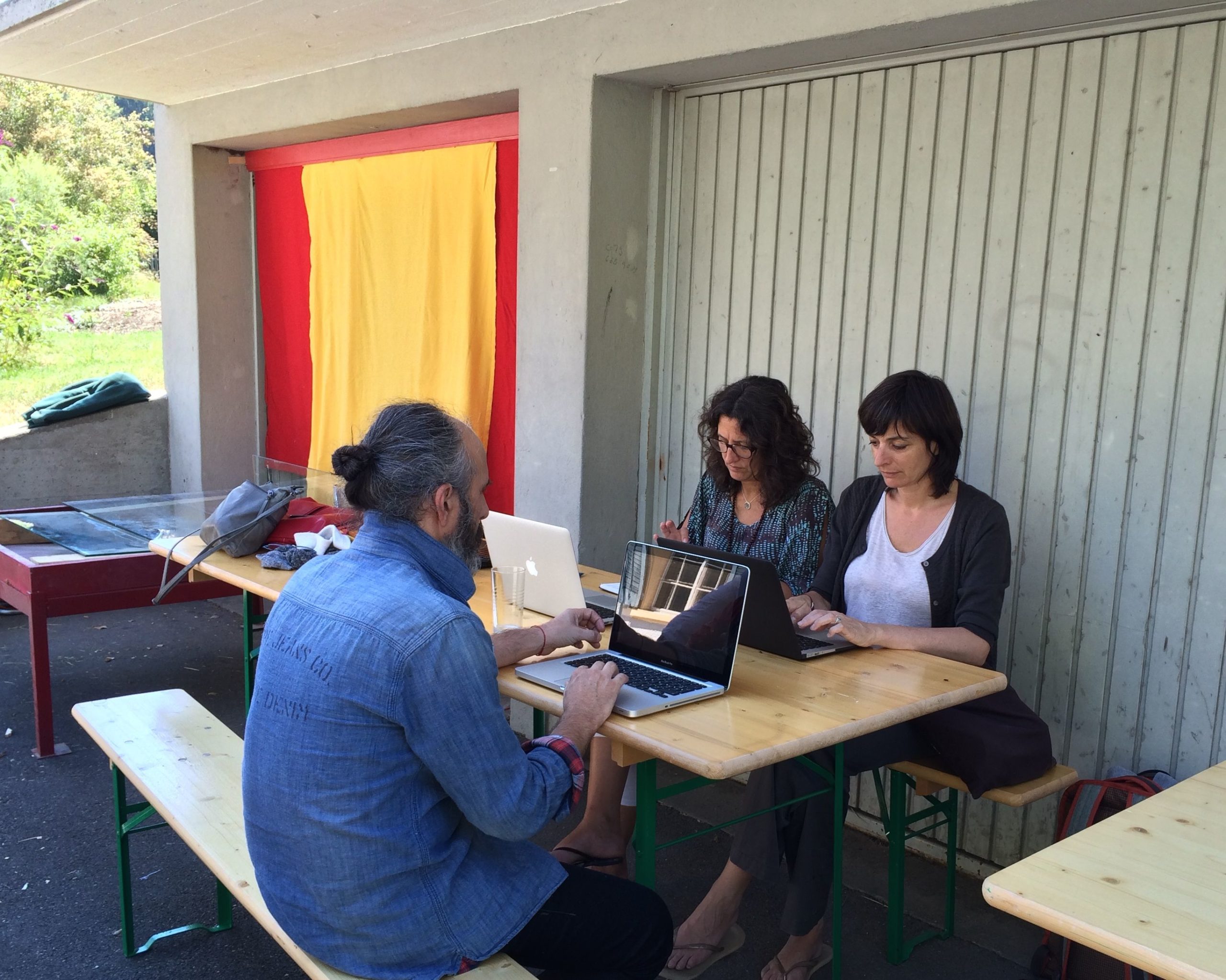 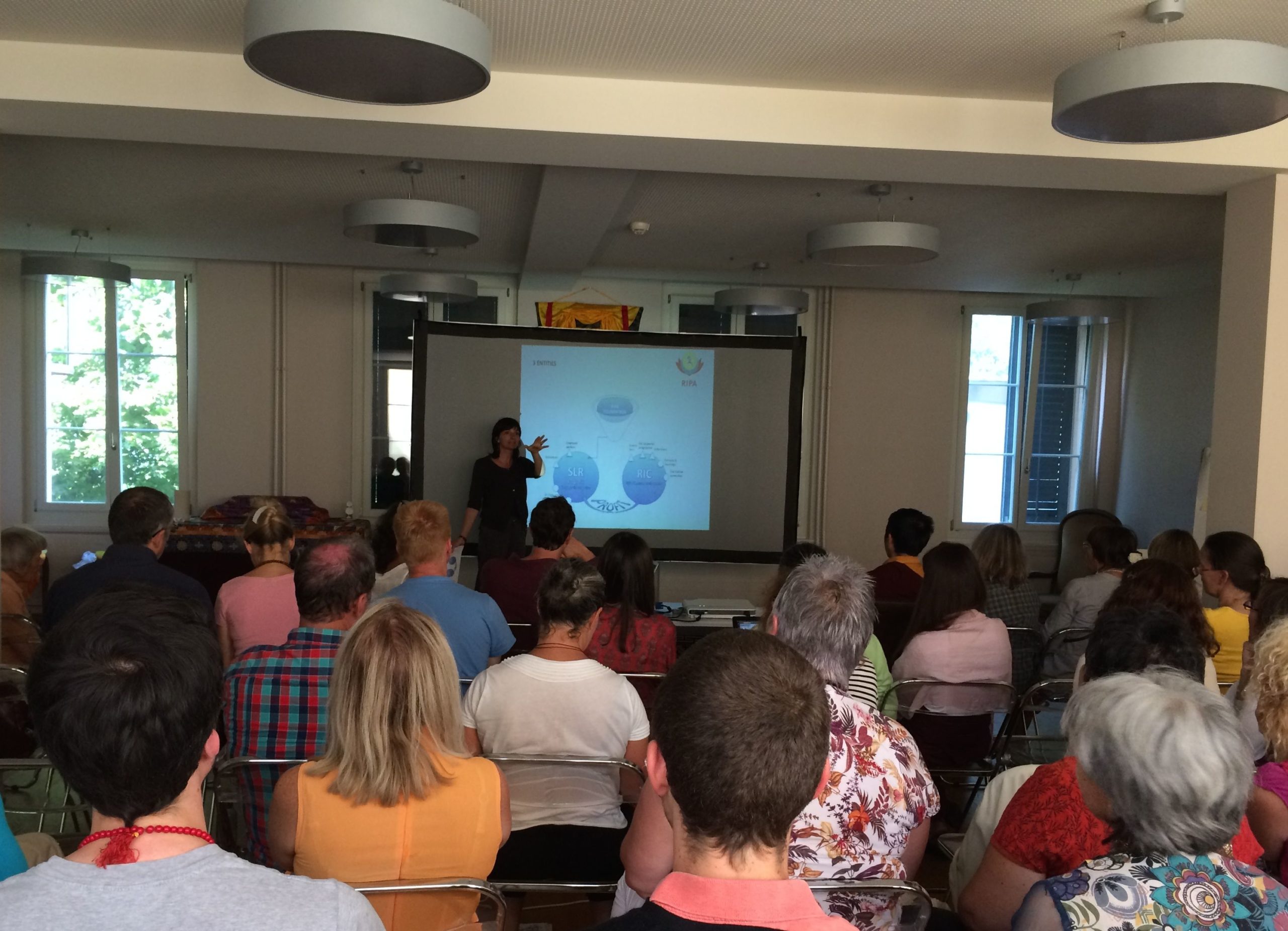 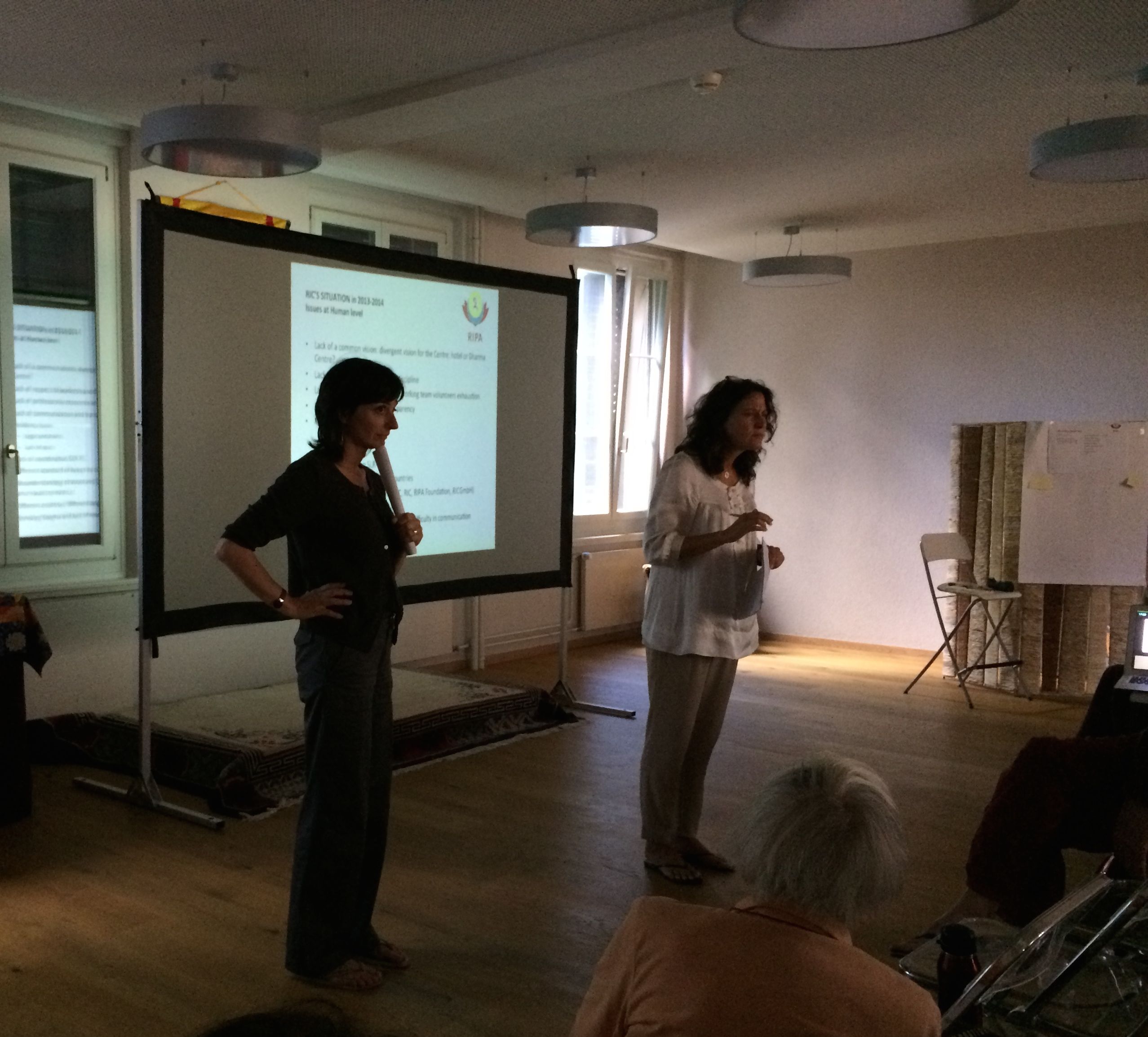 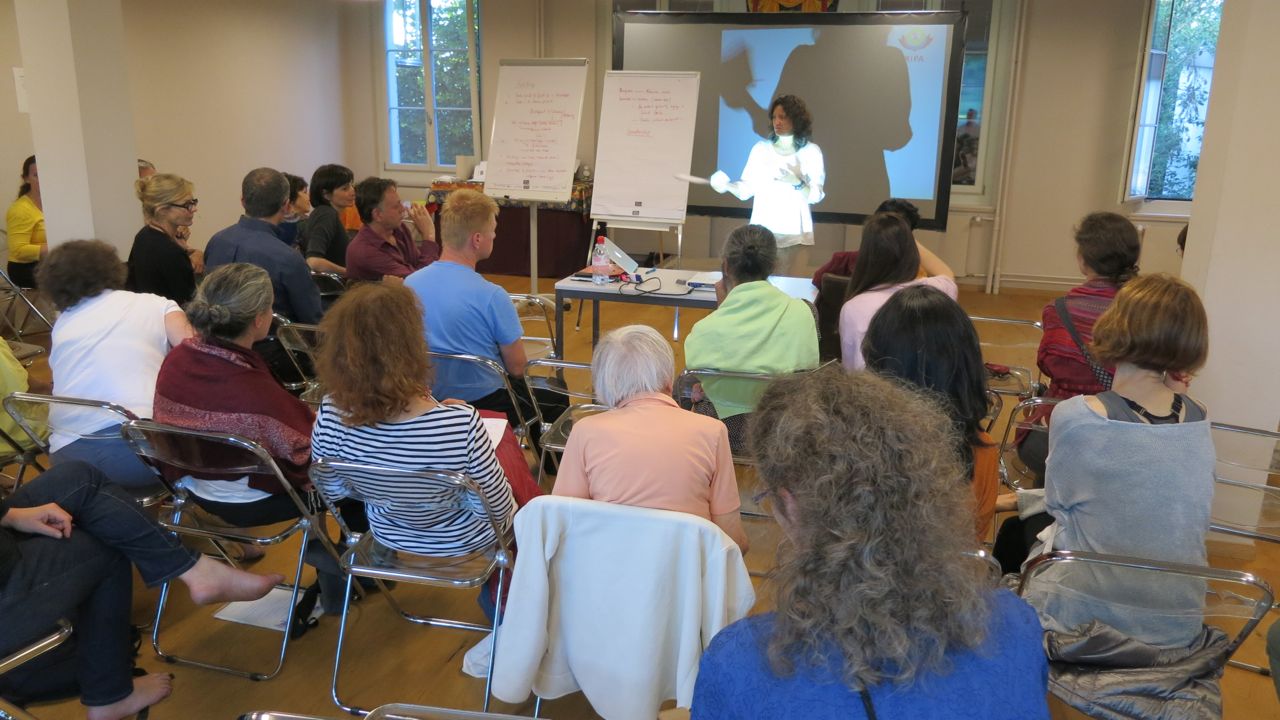 The assembly is attentive and concentrated … exchanges with students are complemented by the projection of organigrams and explanatory charts … Each workshop gives a detailed account of its discussions… But above all, the meeting was seriously prepared.

Sacred Odissi Dance Based on the Seven Line Prayer to Padmasambhava
A beautiful story to finish our second week: Chloe has become a great specialist in this dance that we have enjoyed several times during our retreats; and, she wished to create a dance celebrating both Buddhism and Odissi (the sacred dance of Orissa). Rinpoche encouraged and advised her to choose the Seven Line Prayer to Guru Rinpoche. Since the Odissi dance tradition only allows dances that use Sanskrit texts or texts written in Oriya (the language of Orissa), there was an initial problem to solve. The Seven Line Prayer not being extant in Sanskrit, Rinpoche himself had asked for a translation, from the best specialist (currently) in Sanskrit. For her part, Chloe requested her master dance teacher to choreograph the dance. Then, a renowned composer created a sublime traditional music composition, accompanied by the greatest percussionists of Orissa, who are also master teachers of Chloe. Presented at the end of the second week of retreat, this extraordinary “danced prayer” transported those assembled. And Rinpoche, very moved by the performance, expressed his wish that it be shown in many places, so that it might spread to other Odissi dancers and become a part of the sacred Odissi dance repertoire. 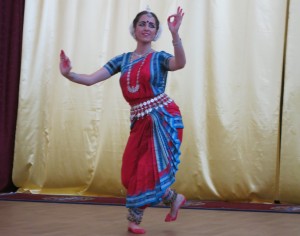