News from Nepal #1 – After the earthquake 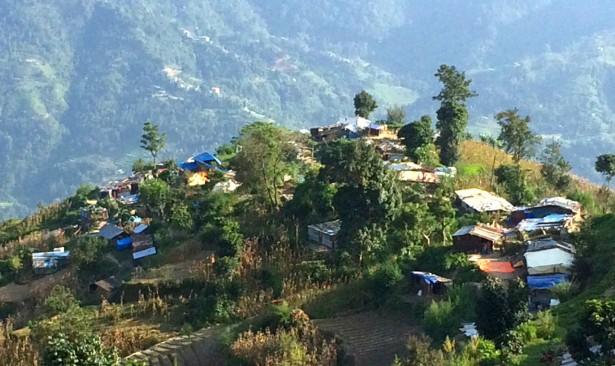 Clinging to a mountainside at 1718 m altitude, this small village was destroyed in its totality by the April earthquake. It will be rebuilt thanks to the strong commitment of Gyetrul Jigme Rinpoche, by those close to him, and by student donors.

Through Rinpoche’s Inspiration   It is through one of his Nepali students that Rinpoche learned of the misfortune of this small community of three hundred and fifty inhabitants, of which one hundred and fifty are children and young adults. Very soon after he arrived there, Rinpoche decided to help rebuild all the houses. Access to this village is rather difficult, and requires a long walk through the mountains, after a first rather uncomfortable approach by car. Once well on the way, here and there one observes a makeshift shelter that is next to a house that it is clear one should not enter because it could collapse at any time. Further, a tin and bamboo building replaces the small mountain school house at the edge of the implosion … We cross a pass and there on the other side of the mountain, we discover the village. The emergency shelters – made of tarpaulins, plastics, sheet metal, stone and all that could be found – are huddled against each other, as if to reassure, keep warm, and stay welded together in the face adversity. On the other side are tiny plots of terraced crops on which the villagers produce strawberries for sale, as well as corn and vegetables for consumption. A harvest that gives them an average only three months of food. And if, outside of these times, men do not find work, the family does not eat. 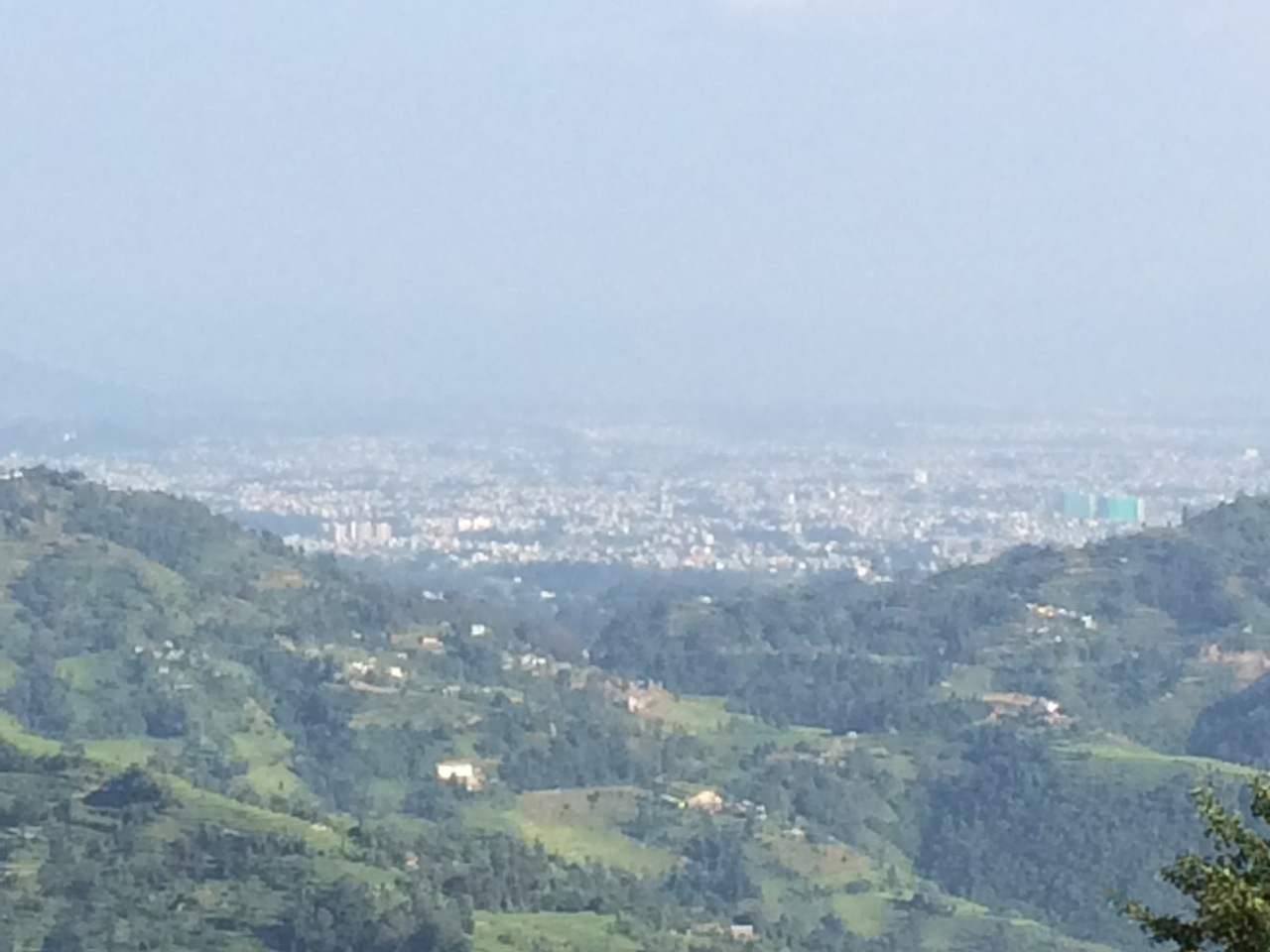 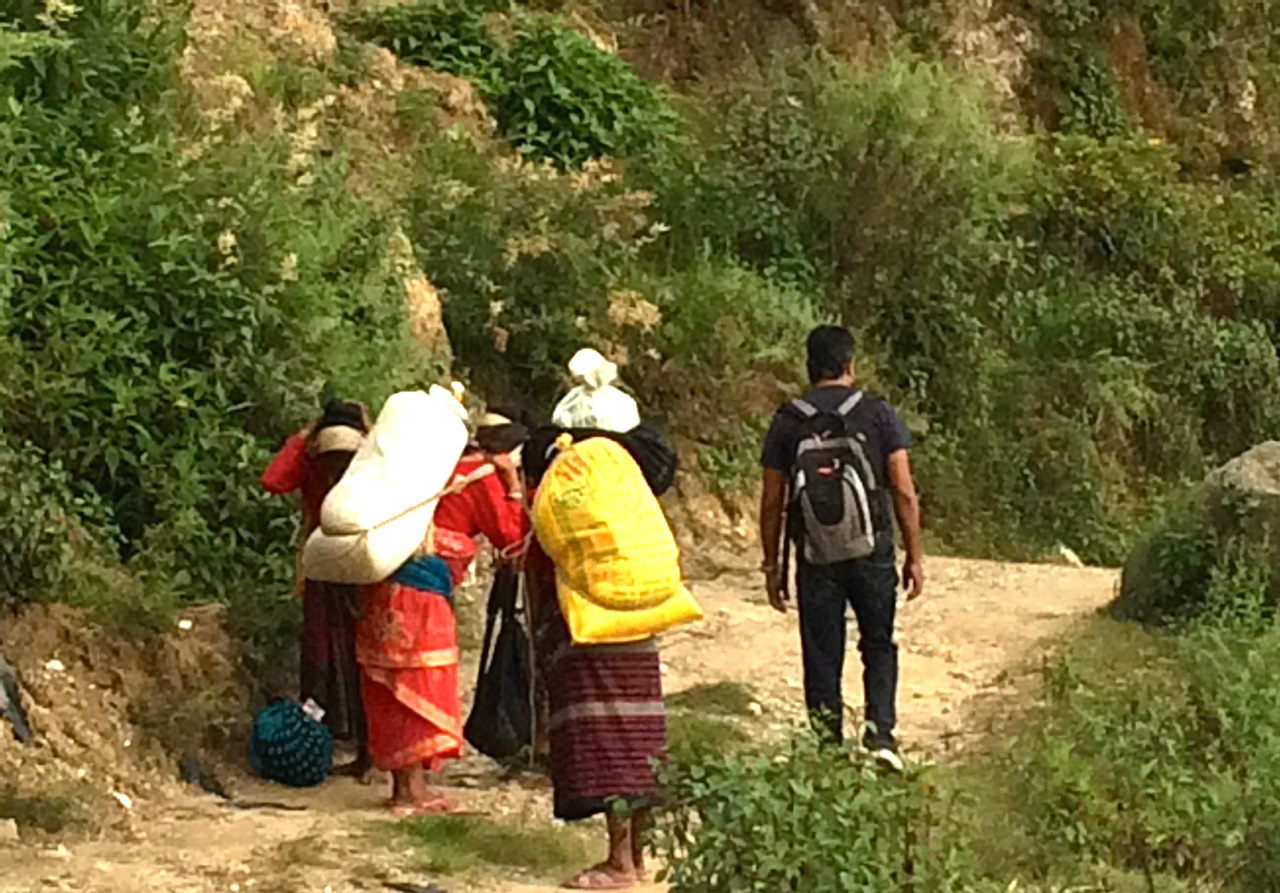 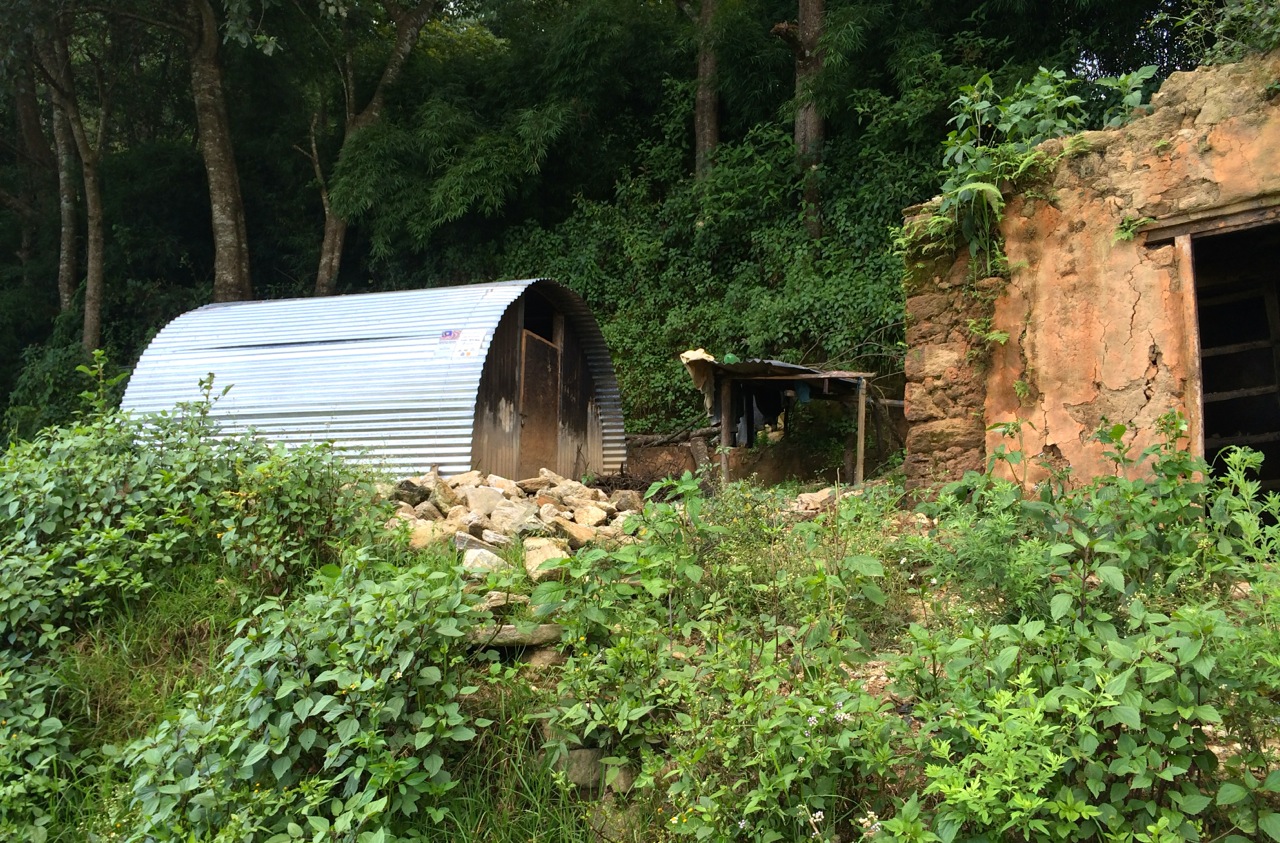 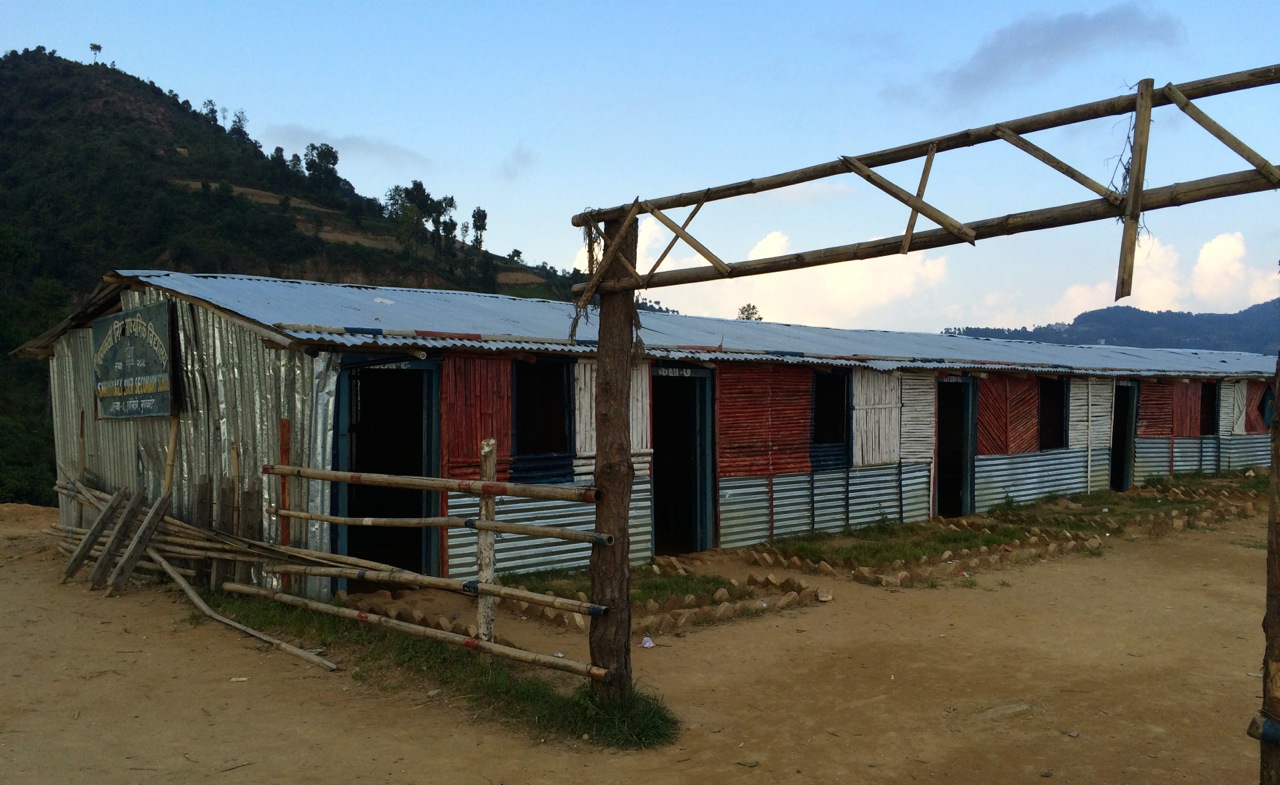 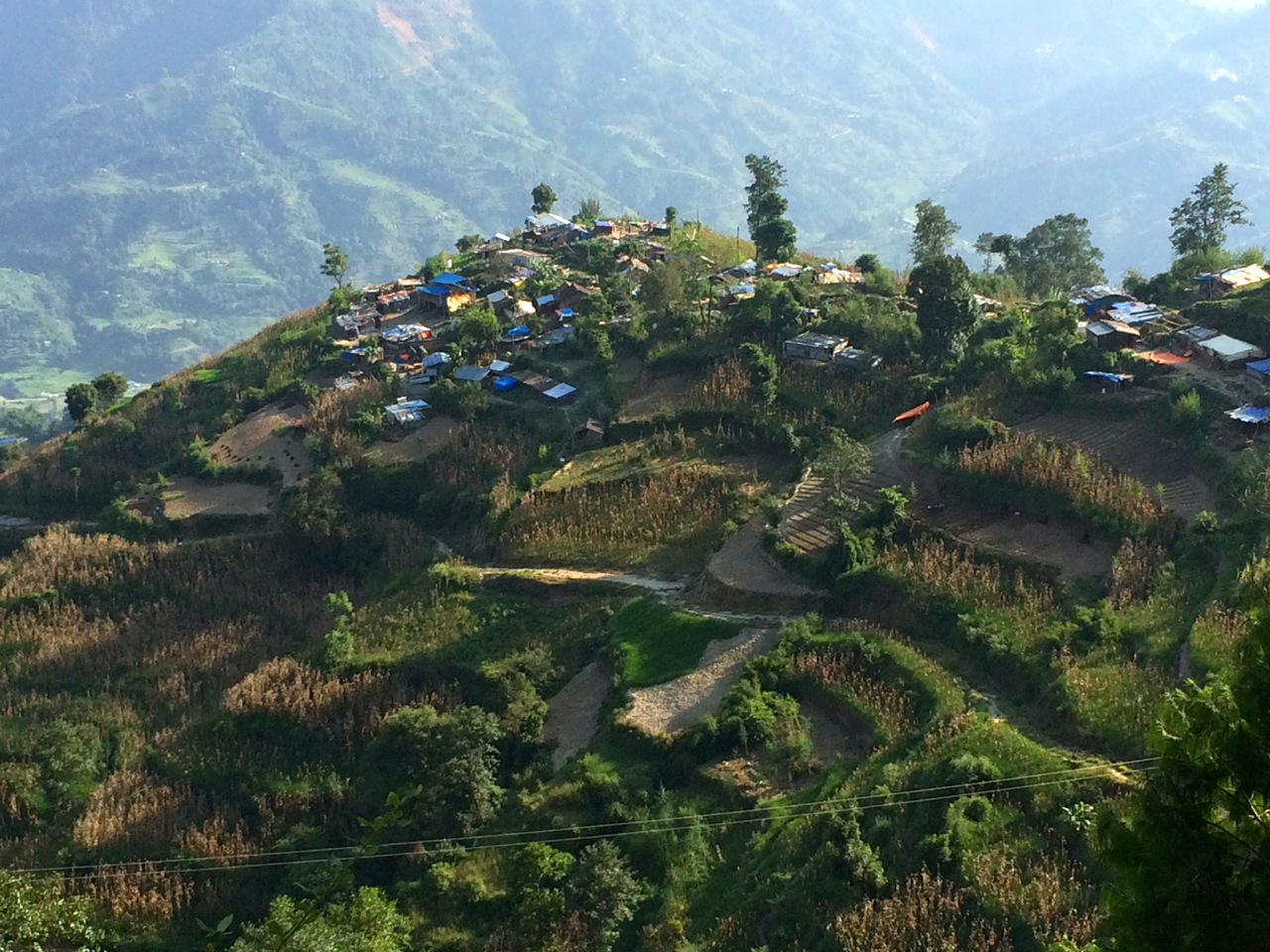 Rinpoche on the scene just after the earthquake … The only access to the village, the road by which everything is transported on the back of a man or woman … A fortunate house … The small temporary school … The village surrounded by terraces of crops … To the south in the distance, Kathmandu and its pollution.

A survival situation  . The whole community is Tamang, one of Nepal’s ethnic groups that are close to Sherpa and Tibetan cultures. And all the families are Buddhist, except for one that is Christian. Extremely poor, none of them has ever had the opportunity to go to school and the earthquake has placed them in a situation of extreme survival. The only positive: water. It is safe because it comes from a source situated a little further up the mountain. Some of the women recounted that when the earthquake happened, they were lucky to be outside, some started to cry out with shouts, while one of them fainted, and a little further on, a child was buried and died. All, without exception found themselves without a roof, without anything at all, in shock and isolated. Welcoming, solid, these villagers are facing the future and are now turning to rebuilding their homes, life resumes. One can note that Binay, the Nepalese engineer and project manager, has established with the villagers a spontaneous rapport, warm, friendly, almost like family, and he is incredibly well received. Listening, he hears their news, answers their questions, explains, and even manages to make them laugh. Nevertheless, two young women explain that they now know that the drama can recur at any moment and a dull fear stays there, lurking in the background. 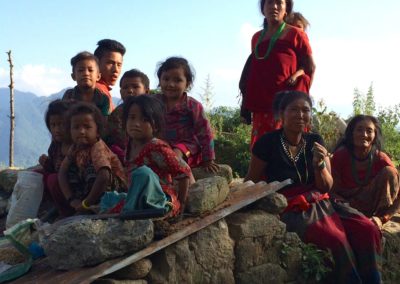 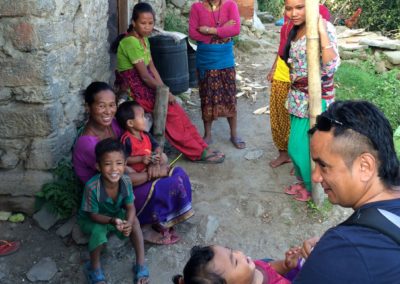 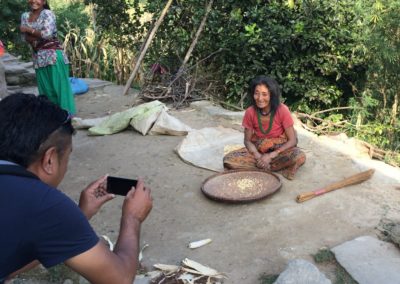 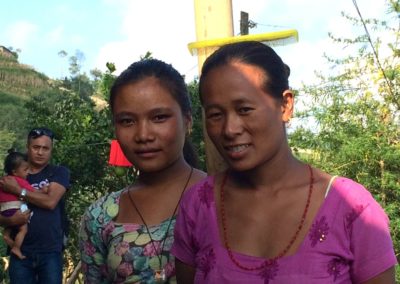 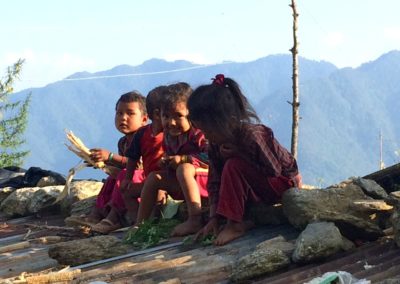 One of the families who received us … Exchanges between Binay and some villagers …Some smiles of complicity and laughter around a photo … Two young women of the village … The children participate in their own way.

Reconstructing houses  . Very well thought out and designed by an architect and an engineer under the inspiration and impetus of Rinpoche, the project that starts under the responsibility and authority of Binay, is both simple and subtle, elaborate and deeply human. A typical house has been created and it is the villagers themselves who will ensure the construction of fifty five houses planned for all families. It will be free for them. The purchase of materials, transport, remuneration of the architect, engineer, and Binay, the project manager, are being borne by the donors. It was also under the authority of Binay that the village committee building sets priorities, checks the work, and monitors progress. Moral authority for the entire village, this committee is composed of eleven people – five women and six men – each representing five houses. The buildings will be provided by twenty villagers after they have undergone training on site in a yurt about to be installed. Alongside them, the rest of the people are helping. Women, children and adults, all are eager to build their houses and all are helping by cooking, carrying loads, supplying water to the workers, etc, with each participating according to their ability, age and strength. 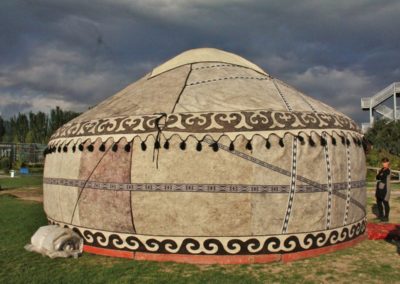 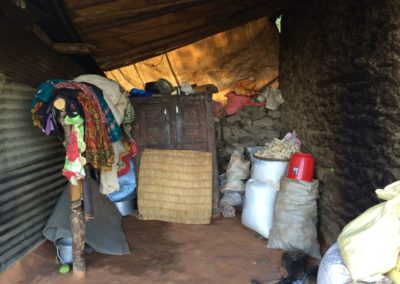 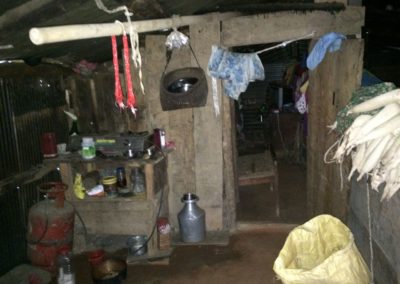 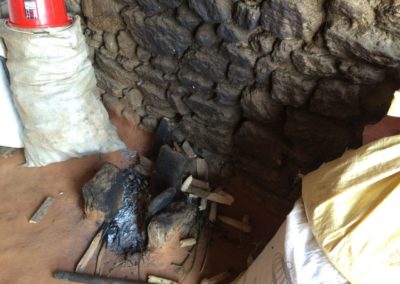 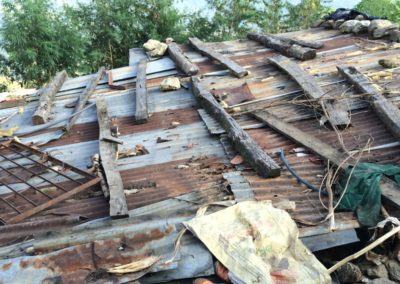 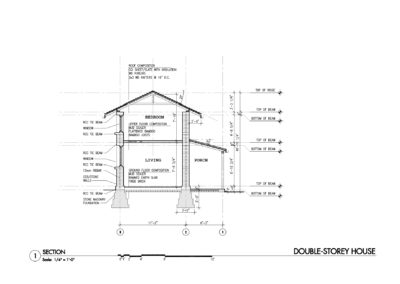 Belongings, furniture are stored as possible … … Inside, one tries to manage as best as one can but the gas shortage does not help … Cooking is done on a wood fire that rests against a wall that still stands, but that will be soon dismantled to recover the stones … A consolidated “roof” … A model of future houses … The yurt which will train twenty people before laying the first stone.

And the children?   The day of our visit, they are there around the adults. Some make contact with a smile, others are serious and stand a little behind. All observe and listen carefully to what is happening, and what is being said, and that is translated into Nepali by Binay. And when adults laugh at one of his words, they also laugh. The younger ones seem to have rediscovered the pleasure of playing, but the games are loaded with meaning. What does one make, for example, of the little girl, who witnessed the disappearance of her village, and who has already had the experience of the soil giving way under her feet? And, well one designs their new home on the floor, some stones turning into the kitchen where meals are prepared and the vegetables cooked. But above all, one is careful to leave their shoes at the entrance so as not to soil their new home. Touching, endearing … Paradoxically, it will be for me who writes these blogs, the most shocking moment of the day. This silent scene, naive and innocent, sums up the drama that has played out here in Nepal. 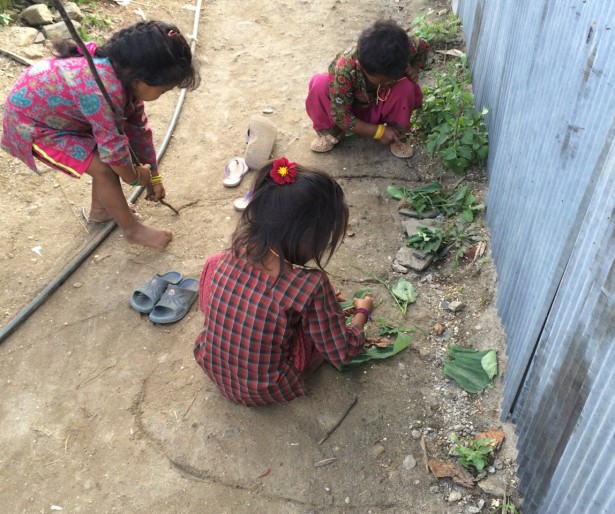 For these girls diving into their home and their imaginary kitchen, the rest of the world no longer seems to exist  .

Upcoming blogs on the Gong Ter…..

(*) Mero Gaon- “my village” in Tibetan – has as its mission the rebuilding of Nepalese villages affected by the earthquake in order to allow people to return to a normal life and to support their basic needs.