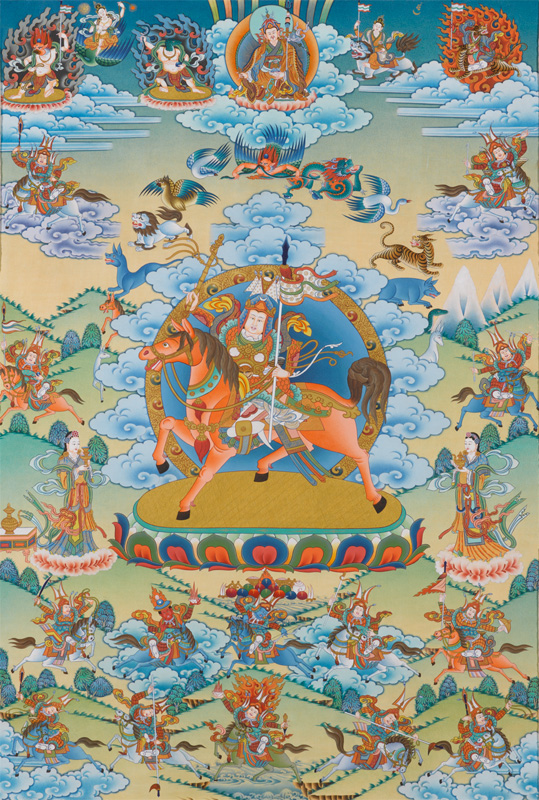 The Lhasang or Smoke-offering to the Deities

The Lhasang is a smoke offering ritual offered to the Deities and the Three Rare and Sublime Jewels, the Three Roots, the Dharma Protectors and Guardians, the wealth gods, local deities, lords of the soil, etc. By doing so, any impurities and corruptions are cleansed and purity of intention is brought about.

The practicing of Lhasang is also said to help increase the Lungta of a place or a person and to invoke the Dralhas.

Lungta or Wind-Horse can be interpreted on four different levels: on an outer level, it was a mystical figure of pre-Buddhist times, symbolizing both the celerity of the wind and strength of the horse to carry out prayers as well as any activities one may embark on. It is related to good fortune – Lung (rlung=wind) means any activity or undertaking; ta (rta=horse) is ‘to follow a path’ or ‘to travel’ 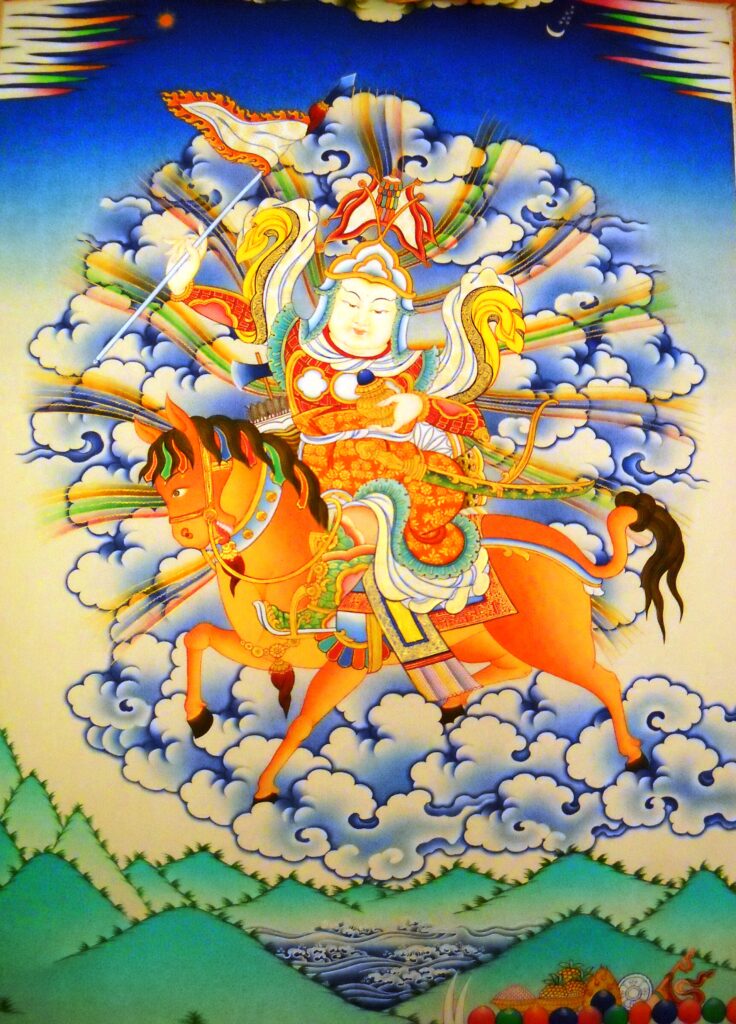 On an inner level, it refers to positive qualities, life force and good luck. It is the subduer of evil and the path to enlightenment. On a secret level, the lungta and the four dignities symbolize the play of the five elements, out of which all phenomena are formed. The lungta symbolizes space, the ground of all manifestation; The tiger symbolizes the wind element; the snow lion, earth; the garuda, fire; and the dragon, water. At the most secret level, it is the subtle energy or inner air or wind within the body. This subtle energy is therefore called the ‘wind horse’, in Tibetan lungta. Whether the wind-horse is strong or weak determines whether positive or negative tendencies dominate the mind. On an everyday level, the wind horse is also very much linked to what is commonly known as ‘good luck’. (Rigpa wiki) 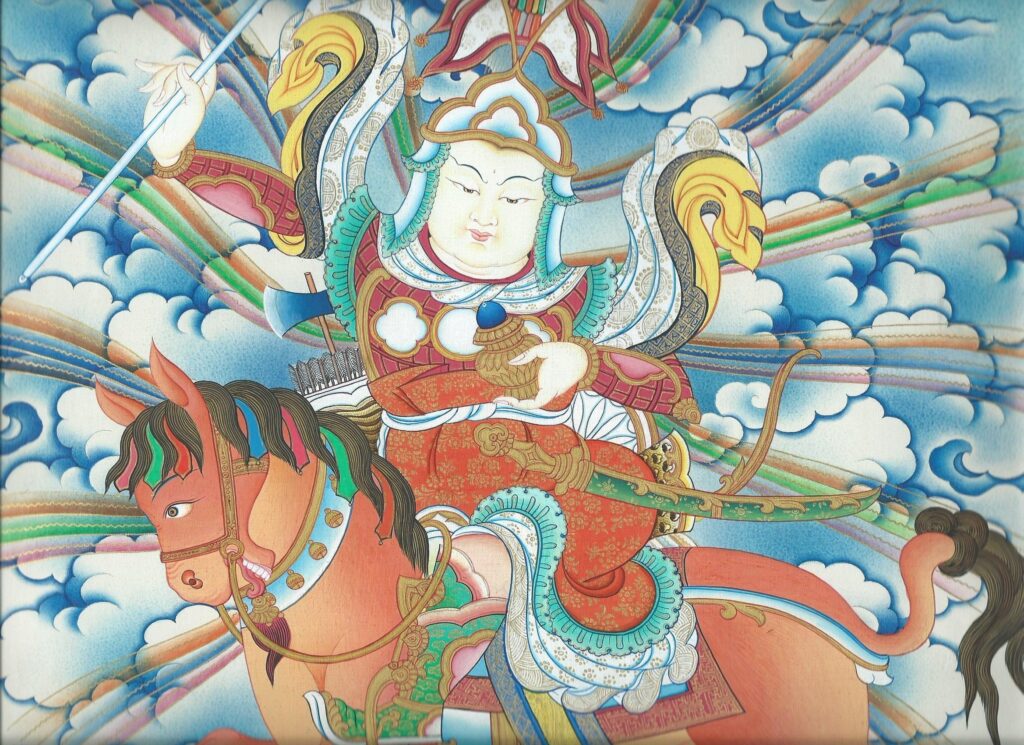 From the perspective of the absolute pure nature of the five elements, one’s wind is considered to be Samaya Tara of the karma or ‘activity’ family of enlightened activity – out of the five Buddha families – ; the ‘horse’ is an image of rapid progress, it therefore helps carry out and take to fruition any activity one has begun without any obstacle or difficulty.

The tiger, lion, garuda, dragon and so on, on the Gesar “King of dralas” Lungta Flag represent not only the five elements but are also to increase the dignity and splendour of practitioners who keep the tantric commitments, and serve as emanations symbolising Gesar’s own enlightened body, speech, mind, qualities and activity.
Furthermore, the emanation of Gesar’s enlightened body and the power that increases the dignity and splendour of yogic practitioners is the lion, the speech emanation and power that increases their renown the dragon, the mind emanation and power that augments their spiritual force the tiger, the emanation of enlightened qualities and force accomplishing their so-called ‘four perfections’, their practice, wealth, zeal and liberation, is the garuda, and the activity emanation and power that unobstructedly accomplishes all Dharmic and mundane affairs exactly as wished for is the Supreme Horse.

Dralhas are dynamically active non-human beings inhabiting the air element, who are usually invisible to ordinary human perception. They form the retinue and agents of Gesar and are usually portrayed as wild, fearless warriors on horseback. The inner aspect of dralha is connected to the subtle energy system in the body, and the ‘secret’ aspect to the nature of mind.

It is also a wordly deity who serves as protector, companion and helper on the spiritual path. 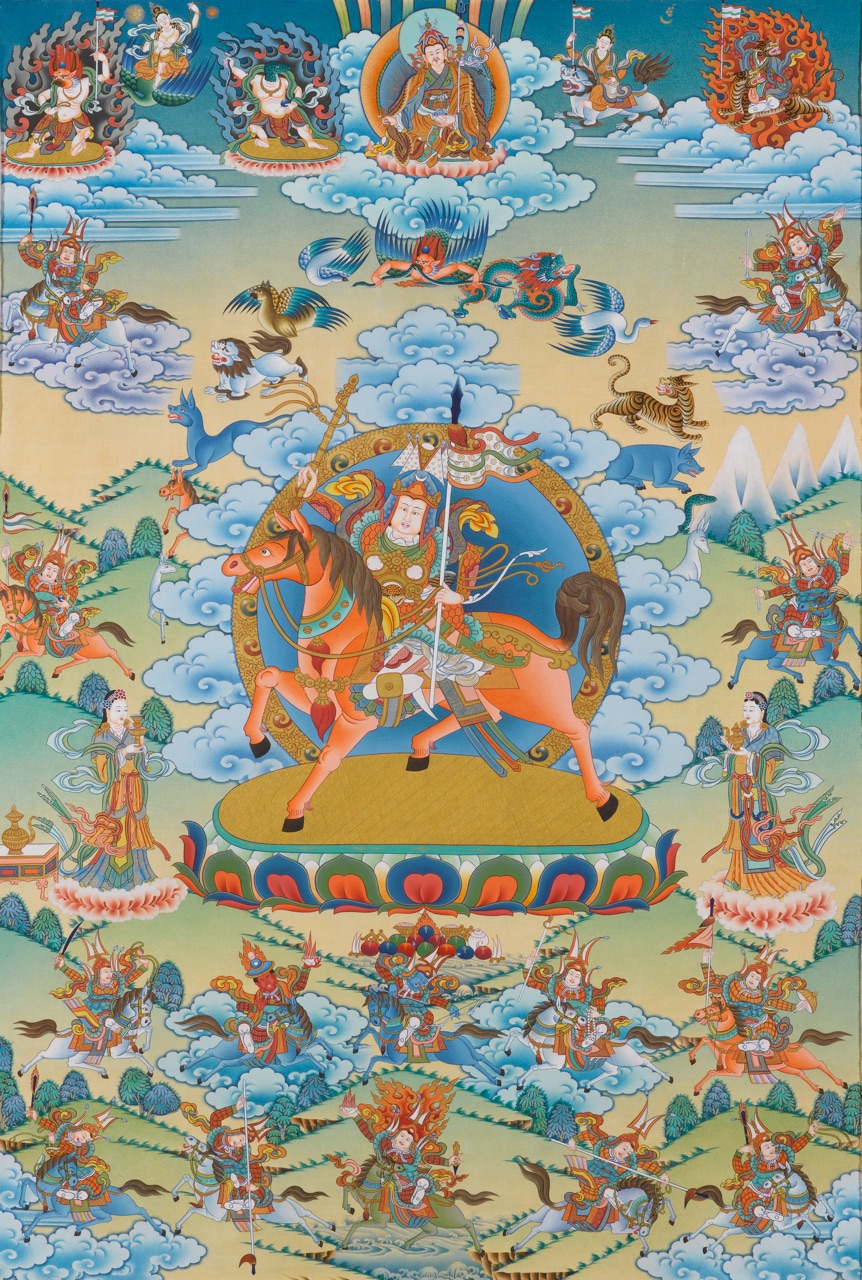 How to make a Lhasang?

You make a physical offering of the smoke of various sweet-smelling woods such as white and red sandalwood, frankincense, artemisia, juniper and so forth along with flour mixed with a top-offering of tea, alcohol, milk and so on and consecrated with mantra and mudra. In an imagined smoke-offering fire-pit or the divine palace of a smoke-offering oven create an infinite emanation of the outer, inner and secret offerings, and—more especially—having filled all of space with clouds of purifying smoke, imagining an outpouring of an infinity of offerings such as flowers, incense, lamps, perfumed waters, foodstuff, music and the trio of amrita, rakta and torma, the eight auspicious substances and eight auspicious symbols, the seven treasures of a universal monarch and so on. Pleasing the deities of primordial awareness and worldly gods with real and imagined offerings such as these, gather the accumulations by the power of which you purify all your non-virtuous actions, violations of your general and specific vows and tantric oaths, reneging on your vows and undertakings, breaking vows and promises, acting hypocritically, repaying kindness with ingratitude, failing to act with modesty and decorum and so on whereby your mental-stream has become defiled.