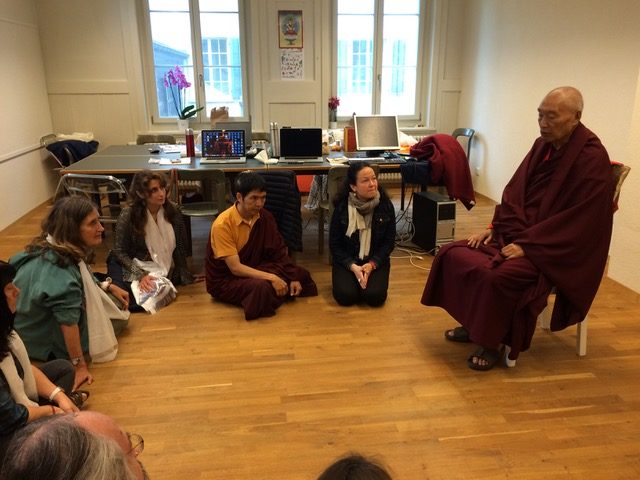 The seed of Ripa International Translation Committee was planted around early 1993 when Gyetrul Jigme Rinpoche translated the Medicine Buddha sadhana from Tibetan into English. Subsequently, a few students of Rinpoche from different countries translated that text into their respective languages. Following that first practice, the brief sadhanas of Taksham Yeshe Tsogyal, Guru Rinpoche, Gesar Dralha, Lhasang and the condensed Taksham Preliminary Practice were translated.

In 2010, both Gyetrul Jigme Rinpoche and HE Namkha Drimed Rabjam Rinpoche decided to have some extensive sadhanas translated, such as Taksham Yeshe Tsogyal drubchoe, Gesar Enrichment drubchoe and so on. Ripa Ladrang Foundation in USA became responsible for translating the mentioned texts from Tibetan into English, entrusting most of them to Ven. Vanessa Kubota. Those English versions served as reference to the further translations into other European languages.

Since 2012, translators from all the languages of the Committee led by Lama Tenzin gather for two weeks twice a year, to discuss and correct the texts translated on the previous period. 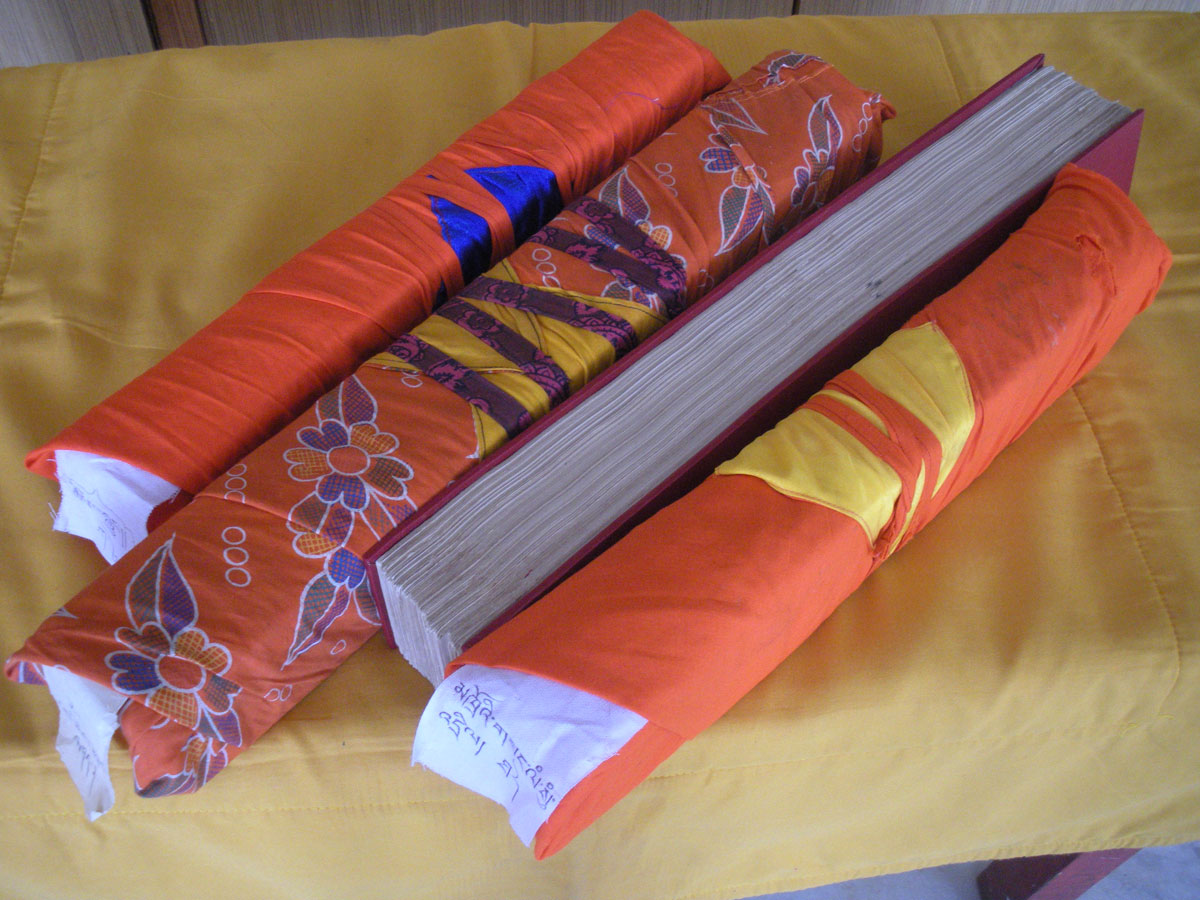 A number of new texts have been translated

Currently, our work is focused on the translation and correction of H.E. Namkha Drimed Rabjam Rinpoche’s biography. 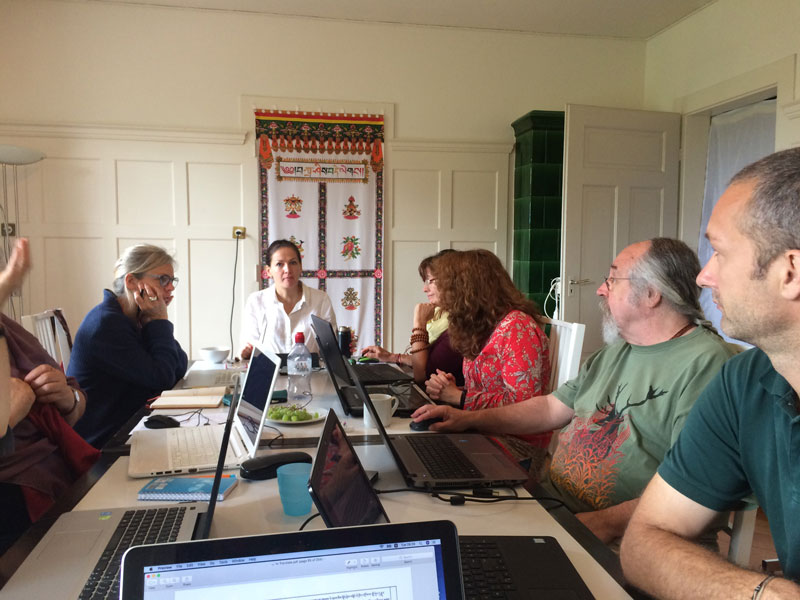 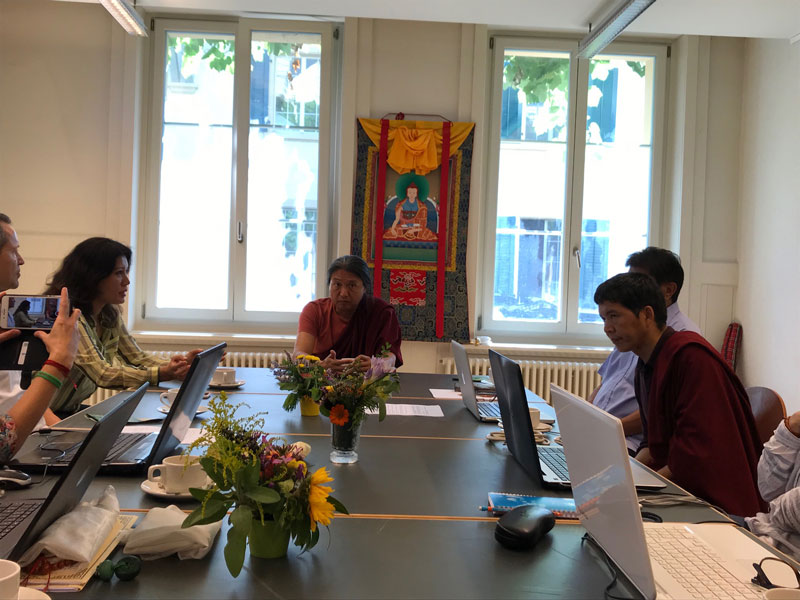 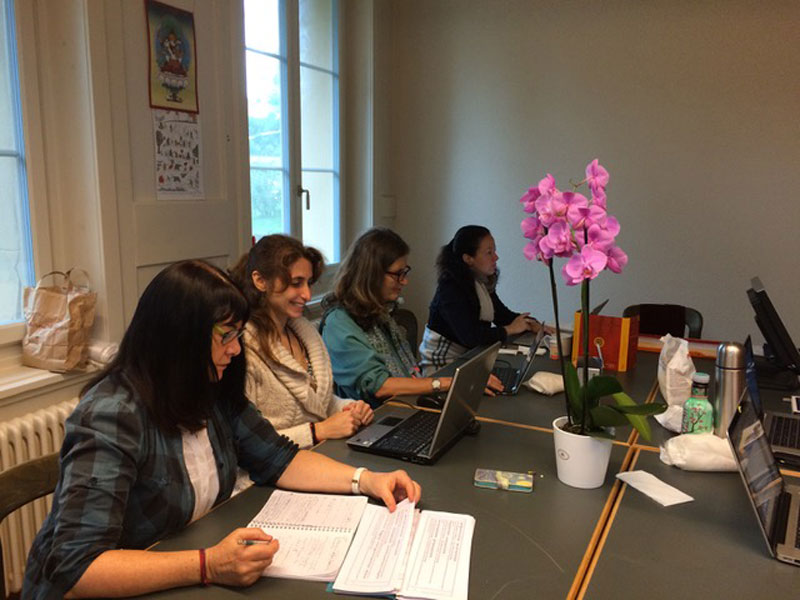 Translating Dharma texts is a complicated task that requires several skills, such as a good knowledge of Tibetan grammar and vocabulary, a fair understanding of Dharma teachings and an excellent command of the westerner language that the text is being translated into.

That being so, and after years of experience, we follow a particular order in our work to increase the quality of the resulting texts. In the first place, one of our main translators translates the original Tibetan text into English. From both English and Tibetan versions, the rest of translators translate the text into their respective languages. When the text is ready in all the languages of our sangha, the translators gather for two weeks on biannual basis to correct it. During those Committee meetings, Lama Tenzin reads three or four lines of the text in Tibetan and explains them word by word. Then, one of the translators translate those explanations into English. All the participants check if the text in their language agrees with the explanation given or there is anything that needs to be edited or changed. There is often a debate on the meaning of the Tibetan words in the particular context, and also about what would be the most accurate term in the different languages, according to the nuances of the wording. After the discussion, the resultant English version is read out loud and Lama Tenzin listens to it carefully, to supervise that it is correct and then becomes settled.

This process guaranties a higher quality level than if the text was translated by just one person. Even the translator is very knowledgeable and experienced, there is still room for mistakes. Just to give one example, Tibetan words such as SKU, SUNG and THUGS, could mean enlightened body, speech and mind when they are related to a supreme being like a Buddha or a Boddhisatva, but when we are talking about an ordinary being like a king, a leader or an important person Sku, Sung and Thugs are used to name their three doors in a polite manner. We would make a mistake referring to them as enlightened. In the same way, there are many paragraphs that cannot be translated properly without a good understanding of the context. There are also wordings difficult to interpret because some text are written in a very cryptic way. For all these reasons, it is very important to have always the support of lamas who are versed in translation work.

How you can support to Ripa International Translation Committee (RITC)

In the words of our beloved teacher,  Gyetrul Jigme Rinpoche,  “Ripa translation committee is very important for the Ripa lineage since it has been working on many different projects throughout the years, constantly refining the quality of the translations, and it must be supported to ensure that its work never declines but continues increasing.”

RITC provides the sangha not only with practice texts for the retreats and Dharma programs, but also whatever text requested by our masters, counting on a modest budget. At the present time, we can only cover the cost of accommodation, travel expenses and a thanksgiving offering to the translators after the biannual correction workshops. Only a few of them receive a small allowance. The rest of them have been working without receiving any payment during all these years, but it’s difficult to continue in this way. We need a good long term plan and funding support.

So, please, if you want to contribute sponsoring our team, whatever donation according to your possibilities will be very helpful and most welcomed. Your support will help to fulfil the wishes of our great teachers, and the Dharma to be spread and endure, being beneficial to all beings and a great virtuous action. 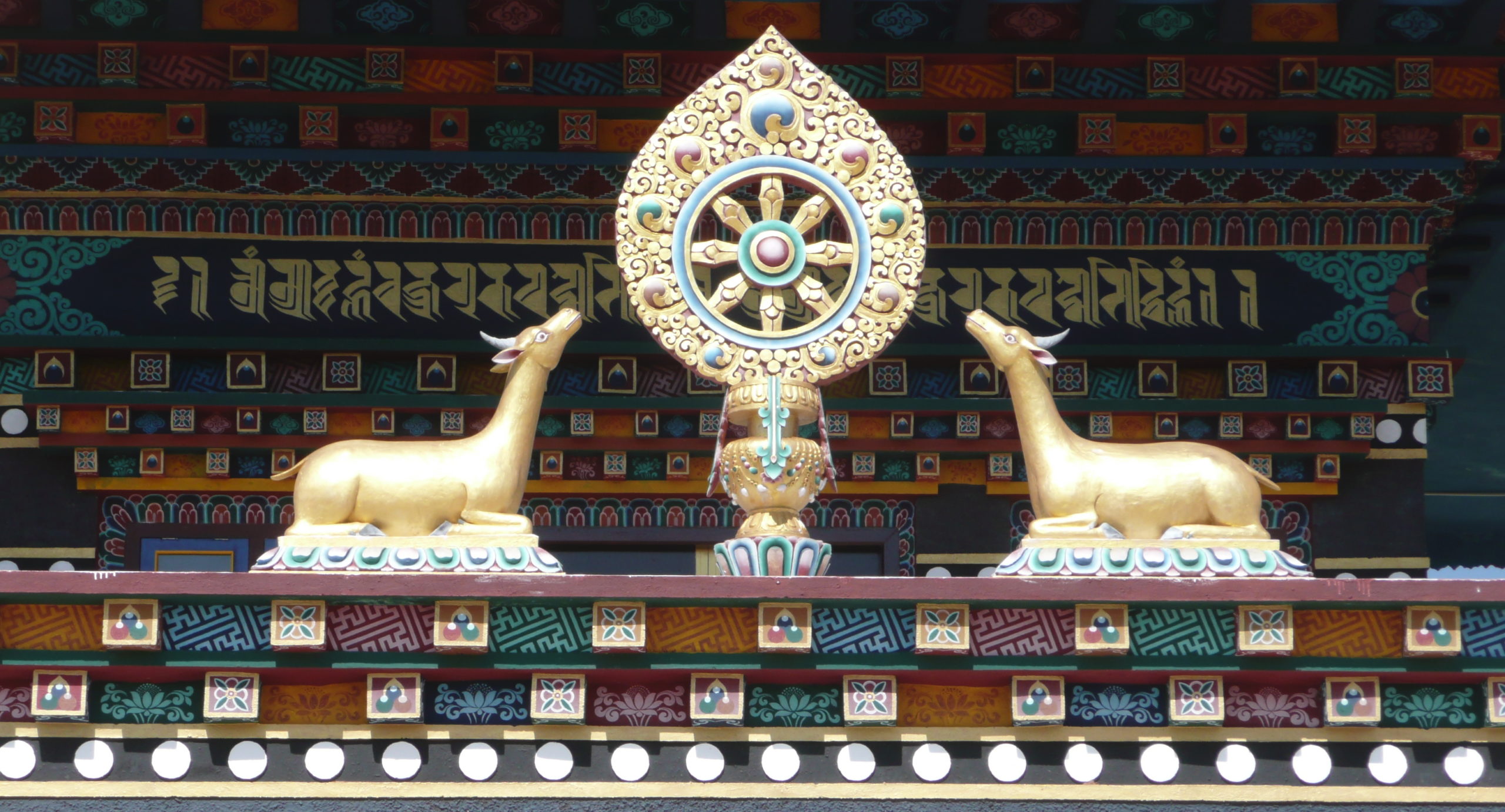 The purpose of translating Dharma texts

Looking back to the Tibetan Buddhism history, in the 8th century the great Dharma king Trisong Deutsen, decided to dispel the darkness of Tibet with the light of Dharma. When the construction of Samye Monastery began many obstacles created by human and non-human beings arose, so the King invited the Abbot Shantarakshita and the Acharya Padmasambhava from India in order to pacify them. Once they arrived in Tibet, both the Abbot and the Acharya adviced the King to translate the Dharma teachings into Tibetan, to make possible that a larger number of his subjects could access the study and practice of the Dharma, which would make the teaching pervade the country and last for a longer span.

To accomplish this mission, King Trisong Deutsen gathered the most intelligent children of the country and tried to teach them the language of India but, unfortunately, they could not even repeat the words properly. At that point, the great Padmasambhava, who is supremely kind to all beings of the world in general, and to Tibetans in particular, suggested to search for a few special children, such as Pagor Hedod and others, who had the capacity to learn accurately due to their previous karma.

According to this, King Trisong Deutsen altogether with his ministers, went in person on a search for those children prophesied by Padmasambhava, and invited them along with their families to Samye monastery. The children studied with Abbot Shantarakshita and Acharya Padmasambhava, becaming matchless scholars.

As Lodhen Sherab, a great translator of the New Translation School, said,

Vairochana match the end of space,

both Kawa Paltsek and Chokro Luyi Gyaltsen are like the sun and moon together, Rinchen Sangpo is like a bright early morning star,

in front of them, I am just like a firefly.

They worked with the Abbot, the Acharya and many other Indian Pandits such as the great Vimalamitra and Buddha Guhya, and translated into Tibetan around three hundred volumes of Sutras, Tantras and commentaries, for over thirty years. Thanks to that, the Tibetans could actually study and practice Dharma, and, moreover, many of them could even become scholars, writing themselves many root and commentary texts based on the original translations. Thus, Dharma pervaded Tibet and, from there, nowadays continues spreading all over the world, being the cause and condition of benefit and welfare of both East and West.

As the Boddhisatva Thogmed Sangpo said,

“All the buddhas, the source of benefit and happiness,

are accomplished by Dharma practice,

which also depends on learning how to carry it out”.

Those westerners who have interest and faith in Dharma, and specially the students of our lineage, regardless of what kind of teachings they study and practice, need their texts translated into their own languages. Not having those translations would mean that the door of Dharma is almost closed to them. Therefore, it is very important that the texts are translated very accurately, preserving their meaning in words that students can understand. 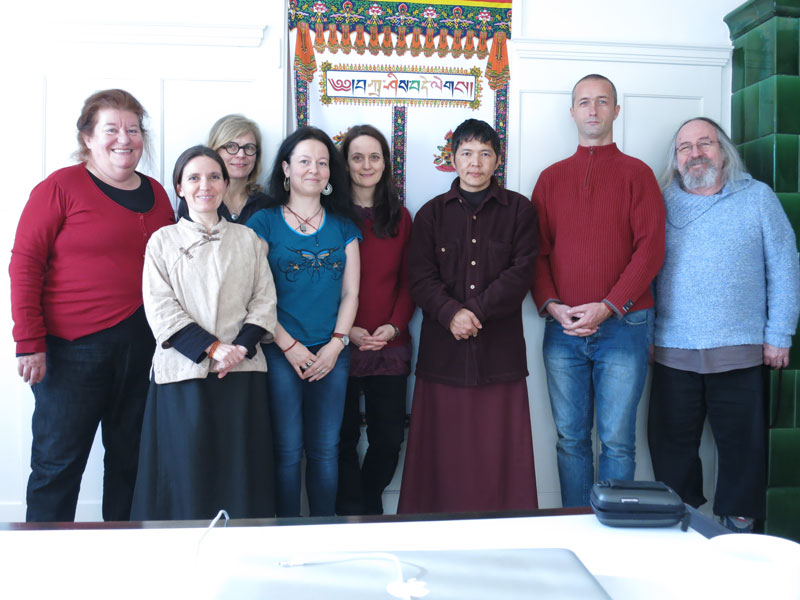